Linear regression applied to the Global residual temperature time series gave the significant rate of change of 0.14 degrees Celsius per decade, being 21 times the standard error.

The monthly Global temperature is calculated by taking the mean value of a world-wide grid of values that are, in turn, the mean of the temperatures measured throughout the month at each of the individual grid points. The statistical Central Limit theorem rules that the mean of a set of mean values should approach a Normal Statistical distribution as the number of values increases. Treating the 509 Global temperature values as a set of samples gave an estimate for the source population as a Normal Statistical distribution with a mean of -0.077 degrees Celsius and a standard deviation of 0.245, with a probability of 52%. Here the mean is not an actual global temperature as all of the values are supplied with a reference level removed, being the average value over the 30 year period 1991 to 2020.

Treating the values as a Time Series gave an estimated model fit of an ARMA(1,1), that is, a first order autoregression moving average model in which each subsequent value is partly dependent on the previous value. The lack of independence between consecutive values means that the more-usual statistical tests are not applicable. 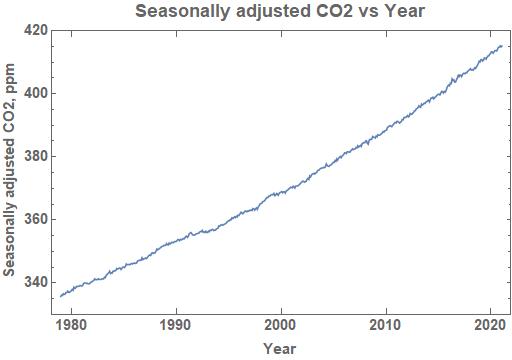 Treating the 506 values of the seasonally adjusted CO2 concentration as a sample from a population gave an estimate for the source population of a Uniform Distribution (335.8, 415.2), that is a distribution that has the same probability for every sample value between the minimum and maximum values shown, (335.8 to 415.2).

Treating the values as a Time Series gave an estimated model fit of an ARIMA(1,1,1), that is, a first order autoregressive integrated first order moving average model in which each subsequent value is partly dependent on the previous value.

Visually the Global satellite temperature anomaly and CO2 concentration have completely different profiles. Treating the data statistically shows that the two sets of measurements fit different probability distributions and different Time series models indicating that there is no causal relationship between the two. While a positive linear trend can be calculated for each of the two series, this does not mean that there is any causal interrelationship as most time series will fit either a positive or a negative trend but this is not sufficient to prove that they are related in any way.

Temperature vs. CO2 rate of change

Figure 3 shows the annual rate of change of the CO2 concentration determined by taking differences between measurements 12 months apart. It replicates all of the major features of the Global temperature profile seen in Figure 1. 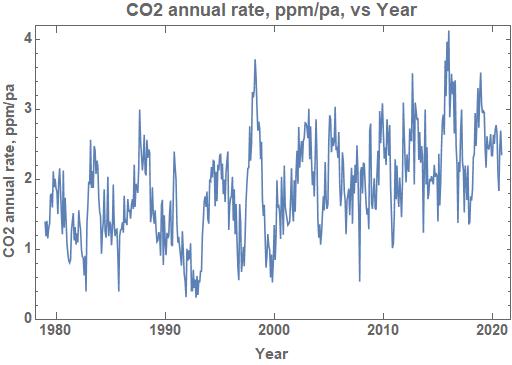 Treating the calculated annual rates of change of CO2 concentration as samples from a population of such rates gave a 85% probability that the data arose from a Normal Statistical distribution with mean 1.86 ppm pa and standard deviation 0.72.

Alternatively, treating the calculated annual rates of change of CO2 concentration as a Time Series gave a fit of a third order autoregressive model AR(3), that is, a weakly stationary series in which each value is dependent on the previous three values of the time series with regression coefficients 0.5703,0.1628 and 0.1387 respectively.

The close appearance of the temperature and rate of change of CO2 graphs plus the fact that both series approximate to samples drawn from a Normal Probability distribution indicate that the temperature determines the rate of change of CO2 concentration. This is confirmed by the application of a first order autoregression model to the detrended global temperature as the independent variable and the annual rate of change of CO2 concentration as the dependent variable. It gave a Durban-Watson D value of 0.76 indicating a positive regression coefficient which was estimated to be 0.62. Adjusting the values for this coefficient gave a Pearson correlation coefficient of 0.13 with a probability of 0.3% that the correlation was zero.

If the temperature determines the rate of generation of CO2, that is d/dt CO2 equals a constant multiplied by the temperature level then, mathematically, this implies that the CO2 concentration at a given time is proportional to the integral of the temperature up to that time relative to a base value at which no CO2 is generated. This would be the temperature at which there is a balance between the various sources and sinks of CO2 at the Earth’s surface. Note that the reverse is not possible as a time rate of change cannot determine a level. For example a rate of change of 2 ppm of CO2 could be from 1 to 3 ppm or 734 to 736 ppm or any other pair of values differing by two, all completely different situations.

Figure 4 shows the sum with respect to time of the global temperature values relative to a base of -0.67, the minimum value from the global list as a calibrated base is not known. The resulting near linear trend closely matches that of Figure 2, the Mauna Loa Observatory CO2 levels.

Treating the 509 values of the cumulative temperature as a sample from a population gave an estimate for the source population of as a Mixture Distribution being mainly a Uniform Distribution combined with a minor part being a Normal Distribution.

Treating the values as a Time Series gave an estimated model fit of an ARIMA(1,1,1), that is, a first order autoregressive integrated first order moving average model in which each subsequent value is partly dependent of the previous value. That is, the same type of time series model as for the seasonally adjusted CO2 concentration but with different parameters due to the different measured physical properties.

Applying the Spearman Rank test, as the distributions are not Normal Distributions, gave a 98% probability that the correlation between the seasonally adjusted CO2 concentration and the cumulative temperature was practically 1.0.

This is supported by the conclusion on the accompanying web page:
Mauna-Loa-weekly-CO2-concentration-data

It found that the Fourier Amplitude spectrum of the annual rate of change of CO2 concentration derived from the weekly data for the Mauna Loa Observatory gave maxima at 27.17 days and 29.42 days. These are the draconic and synodic periods of the Moon which result in a drop in temperature each time the Moon passes between the Sun and the Earth.

Thus the commonly accepted hypothesis proposed by the UN IPCC that increasing CO2 concentration has caused global warming is invalid. The reverse, being temperature driving CO2 concentration, is what has actually happened over the 42 years of measurement. It has long been known that historic data has always shown that temperature change precedes CO2 change. This study provides the simple explanation for this event, namely, that the temperature level determines of rate of generation of CO2.

This site uses Akismet to reduce spam. Learn how your comment data is processed.